For the Israelites, the use of the image of the vineyard in relation to God was a familiar one.  Isaiah speaks of the vineyard owner who planted his vines “on a fertile hillside; he spaded it, cleared it of stones, and planted his choicest vines; within it he built a watchtower, and hewed out a wine press.”  The vineyard owner did everything expected of an owner and he did it well.  What did it get him?  Wild grapes.

Of course, the point is to see God as the vineyard owner.  God is the creator of the world.  He set the universe as we know it in motion.  He brought order to chaos.  He has provided his people with everything needed.

At the time Isaiah wrote the first reading, (c. 8th Century B.C.) the Israelites would have seen the vineyard as the kingdom of Israel.  The problem was that many of the people had fallen away from the one true God and were worshipping either no god at all or false gods.  They had in effect become wild grapes that bore no fruit.

This is where things are at when Isaiah writes as a prophet of the Lord, “What more was there to do for my vineyard that I had not done?”  God had done everything needed but the people had not done their part.

So, the Lord says he will let the vineyard become a ruin.  Why should God do all the work that goes into a vineyard, if the people are not going to do their part?

So, God withdraw his divine protection and allowed the Israelites to be defeated by their enemies.  God didn’t switch sides.  He just let the Israelites make their own choice and suffer the consequences.

Those who had fallen away failed to realize that they continually needed God’s care.  They wanted complete freedom.  God gave it to them but if they wanted to live a life that ignored God’s ways, they were on their own.

Yet, God never really completely abandoned them.  He kept sending prophets and religious leaders.  How did many of the people respond?  We see it in today’s gospel.  They “seized the servants and one they beat, another they killed, and a third they stoned.”

The people in the parable became greedy.  The vineyard owner had down everything expected of him to establish a vineyard before leasing it to tenants.  As was standard business of the day, in payment for their use of the vineyard, he was to receive a fair portion of the produce.  There is no mention that he wanted more than his due but the tenants got greedy and wanted it all for themselves.

God has given us this awesome world with the light and the dark, the plants, the trees, and the animals.  He made it all ordered and beautiful.  He has given us, as humans, dominion over it all.

Have we made good with what we have been given or are we wild grapes?

There definitely are wild grapes today.  There are people who do not do as God asks of us.  In a violent way, we see a wild grape in the shooting in Las Vegas this week.  58 people killed and over 400 injured.  What happened is not what God wanted but the assailant was a child of God, one who had gone astray, but still a child of God.  His behavior made him a wild grape.

The same can be true in any other mass shooting, stabbing, bombing, or vehicular attacks.  Nothing justifies what these assailants do.  What we need to work on is to do what God asks of us.  What is God’s will for us?

What is it that God asks of us?  God has given us the scriptures and the prophets to help us know what he asks of us.  Are we listening or are we like our ancestors who beat and killed the prophets?

Ultimately, the vineyard owner sent his son thinking “they will respect my son” but they did not.  They killed him too.  They crucified him.  His name was Jesus.

I really wish I had some answers as to why these attacks happen but I don’t.  The shooting in Las Vegas was the worst shooting ever in the United States and we have no idea why it happened.

So, what are we supposed to do now?

The same thing we should have always been doing.  Live as Jesus teaches us.

This means following the two greatest commandments, to love God and to love our neighbor.

In the midst of what happened in Las Vegas (and any other violent attack), we can experience a range of emotions.  For the people in the crowd that night, fear was probably the most powerful emotion at the time and rightly so.  They feared for their lives.

Now there is sadness at the loss of life and for the wounded.  And it is not just those struck by bullets.  Those present in the crowd but not shot may live with post-traumatic stress.  They might even feel guilt, asking themselves why they were not injured when so many others were.

There are also the families of the victims, forever effected by this.  What about the people working security at the concert or the hotel staff wondering if they missed something.

Even people who were nowhere near the concert may experience fear when they go to similar events in the future. 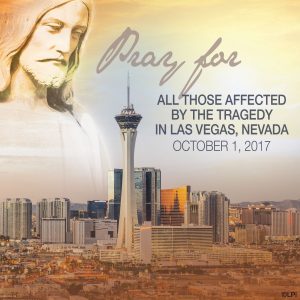