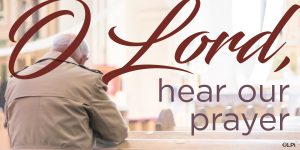 Today’s first reading begins “Moses said to the people: “Today I have set before you life and prosperity, death and doom.”  We each have a choice.  We can choose “life and prosperity” or “death and gloom“.  We would think everyone would want to choose life, life with God, but we see people make bad choices.

Yesterday, (February 14, 2016, which happened to be Ash Wednesday), 19 year old Nikolas Cruz went into Marjory Stoneman High School in Parkland, Florida, killed 17 people with another 14 injured with 5 of them having life-threatening injuries.

We are bewildered by such acts.  Why would someone do such a thing?  We can’t make sense of it.  That’s because it doesn’t make sense.

Fellow students have since talked about how he was troubled and how they kept their distance from him.  Did anyone do anything about his behavior?  He had been expelled from the school for fighting.

So, Nikolas, and I use his name deliberately here for he is a person, had a bad history but before we rush to condemn him and his acts, while nothing excuses what he did, we need to think about him as a person.  In reading the news reports this morning, his mother just died in November and I read someplace that his father died a few years ago.  His “bad history” started before his mother’s death (I don’t know when his father died in relation to his behavior) but could his own suffering in his mother’s death been what put him over the top?  It would not excuse what he did yesterday but it does remind us that he too is a child of God.